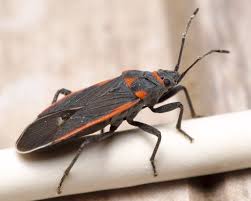 In fact, I was once called the Bug Lady. I was the one called upon to evict from our home critters that exceeded the recommended number of legs. I was the one who argued that they all have their place in creation, and do valuable work.

Just today, I stared down a Box Elder Bug (the one in the picture) and his friends, and declared them to be the physical embodiment of evil.

Which isn’t fair. They don’t bite. They don’t infest (can’t breed indoors, apparently). They were specially created for a purpose. But unfortunately they also really, really like my warm, south-facing patio.

I’ve changed. I mean, I still don’t kill bugs (except for that one silverfish in the bathtub I thought my pet fish Amazon would enjoy. So technically, he killed it.) But I now know how the bug-haters feel. I’m not proud of it.

But Smallville bugs are different.

(It must be the kryptonite.)

I made a noise then, that I’d never heard myself make before. (Kind of like, Eeeeuuggh! I didn’t scream, I’ll have you know.) And then I nabbed my dustpan and knocked the bug-covered strawberry off of my patio.

It wasn’t over yet, because the Box Elder Bugs stuck around. As if to spite me, a large horsefly landed on my patio and died, so that it too could get covered in Box Elder Bugs. And then the bugs took up residence in my mint plant.

There was always at least a dozen of them on the patio at any given moment. They left after a few weeks, until today, and they’ve come back in droves. Apparently they’re back now because they’re looking for a place to spend the winter. And they’re all big red and black adults now. They’re crawling all over everything, and more keep flying in. It looks like the beginnings of a Biblical plague, which is probably what prompted the impression that they were evil.

If it had been part of a sci-fi movie though, they would have symbolized evil.

Of course, Box Elder Bugs, though fairly large for a North American insect, are not the biggest things out here. There’s also the really big beetles with giant antennae that I thought were called June Bugs. Apparently they’re not, according to google. Those guys I generally think are kind of neat, in part because they’re so big. But anything that’s dead gets creepier, including bugs.

So when I was sitting at the bus stop, and I noticed a rather large spider crawling on top of the big beetle, honestly I could not decide which was worse. The spiders here, the ones I have seen, are great. They look an awful lot like black widow spiders, except they’re about the size of a loonie. A big freaky thing eating a big freaky thing is not what you want to see on your way to church.

There are a few just random bugs, too, that don’t really seem to fit my established Metropolis ideas of what bugs are supposed to look like. There’s the medium-small brown flies, for example. Not tiny, like fruit flies, but not as big as any other fly I’ve ever seen. Just medium-small, which was not a category of fly I’ve ever seen before. And the teeny-tiny brown ants. I’ve only seen two, and both of them were in my apartment. One of them was drowned in Gary’s bathwater. (Gary is my air plant, for those who don’t know.)

I don’t mind those, really. But I really don’t like the ones that want my food. The wasps, for instance, that live on campus at the Institution of Joy and Happiness, where I work. I tried to eat outside once. It was a beautiful day.

I’m usually not bothered about bees or wasps, either. I’ve never been stung, I know they won’t bother me if I don’t bother them. These wasps didn’t read that e-mail apparently.

It would hover around me. Behind me, just to be super creepy, so I would see it chasing me when I turned around. So I left for a bit, walked quickly away. Best thing to do. Can’t swat at it, it might get mad.

And then it was gone. Everything was fine. I went back. And then it came back.

So I did it again, with the same results, and then I started freaking out a little. So I swatted at it a little, which freaked me out more, because I was sure it was getting mad.

After, a few repetitions of this nonsense, and having likely convinced several students I had gone nuts, I came to my senses and speed-walked to the nearest building to eat in peace.

But food is not always safe indoors. Sometimes you bring the bugs with you.

I knew, in theory, that fruit with holes in it could have a worm. I’d never seen it happen. Then I saw, on a pear I had, little black specks in some webbing. Mice?

No, I know what that is. It’s caterpillar poop. I’ve seen it in leaves when I collected caterpillars from their nests so I could raise them.

This was alarming. An actual wormy thing, inside my food!? But I wanted pears with cottage cheese and chocolate sauce. And I was eating those pears. That wasn’t negotiable. I got them for free. You don’t not eat free food.

So I cut it open, and that noise happened again. (Eeeeuuggh!) I thought one of the seeds was a little slug-like worm. It wasn’t, as I discovered when I got up the nerve to return to the kitchen.

There was more caterpillar poop inside. I cut out everything that had contact with the tunnel or the poop. Washed everything. It all looked like proper, eatable fruit. I wondered where the “worm” was, but everything was fine so why worry.

(As a side note, I may never eat whole fruit again. I’m cutting up everything.)

The real drama came later, after I’d enjoyed my pear and chocolate sauce, and went to put the bowl back in the kitchen.

There was a reddish thing lowering itself down from the cupboard into my fruit bowl (which is actually a colander). There was that noise again.

I didn’t even know that something like that could happen. Worms in apples, sure, I’ve heard of that. But caterpillars that go in, munch on your fruit, leave, and then come back in the creepiest way possible?

ARE YOU FLIPPING KIDDING ME!?

They do this to me on purpose, I’m sure. The bugs succeed in creeping me out, then they do something even worse just to see me freak out more. I mean, it’s happened three times.

Bugs swarming over something, look, let’s do it again only worse cause it’s on a dead bug.

Caterpillars in the fruit, tada, here I go again.

And don’t even get me started about the fruit flies that drown themselves in my tea. I mean, that happened in Metropolis too, but come on I was gone for like five minutes. I’m sure Amazon the fish appreciates their sacrifice but I don’t.

I used to like bugs. If I can get a little intellectual here, I think the reason I’ve started disliking bugs has to do with the basic reasons we bother getting upset about mostly harmless bugs in the first place. It comes back to disease. Bugs congregate around filth, so we associate them with filth and disease.

Now that it is my sole responsibility to make sure that I do not die of food poisoning or accidentally ingest something toxic, bugs bother me. Because now they are my problem. Plus, I don’t know these bugs. I grew up around Metropolis bugs, but these Smallville bugs could be dangerous. You never know.

One thought on “Why Bugs? Why?”